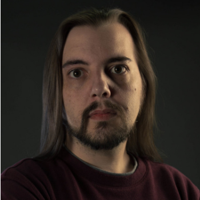 Since 2000, Nash Bozard has run Radio Dead Air, a live webshow featuring music, comedy, and commentary about all things geek. An outgrowth of the show was the regular segment “WTFIWWY,” weird news coverage that went on to be featured on That Guy With the Glasses. In addition, he’s looked into the worst of the Doctor with Doctor Who Classic and currently produced a new series focused on fantasy films, Here There Be Dragons.