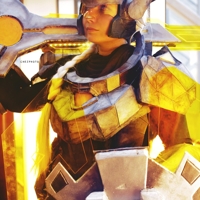 Rhoulette discovered a profound respect and love for armor-crafting, prop-making, sewing, and special effects after debuting her first cosplay at Otakon 2014. Since then, she has debuted several League of Legends cosplays including her first armor and SFX build, PROJECT: Leona. She’s passionate about pushing the boundaries of her costumes, often challenging herself to adopt new skills in order to expand and improve upon her craftsmanship. Rhou was recently awarded a medal for Excellence in Prop and Armor Making at ReplayFX 2017 for her PROJECT: Leona cosplay. An alumna of George Mason University, she studied Applied Information Technology with a concentration in Information Security and a minor in Business. She works full time in the video game industry and her current projects include Elphaba (Wicked), Huntress Widowmaker (Overwatch), and Program Soraka (League of Legends). Fun fact: she’s originally from Serbia and speaks Serbian fluently!