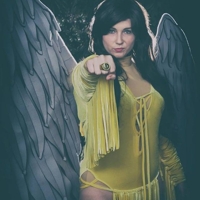 Kayce Super began her journey into the convention world in 2009 and since then has greatly expanded her knowledge of costume creation and conventions. She has created over 35 costumes including Astrid, Dawnstar, Natsu, Robin, MegaMam’ and many more! She also typically attend around twenty cons a year and has been an official guest at more than 15 shows! In addition, she has won several awards and been figured in the 2015 issue of Icosplay Magazine!