Ohayocon is a ton of fun; it has to be to keep attracting over ten thousand people every year for the past several years. We set up a photobooth and the convention and took a ton of Ohayocon pictures in 2012.

One nice thing about Ohayocon is that it's rather well organized. We took video of the registration line extended hundreds and hundreds of people long, yet we found it was moving very quickly. The convention also opened registration for a short period on Thursday, so most people didn't have to wait for several hours in line.

Ohayocon's dance events had also been improving every year. The first year I attended had a huge waiting area for people hoping to get into the rave, as there simply wasn't enough space for everyone in the room they had it. The second year fixed that problem, and this year was even better. They moved the official convention dance to a large ballroom in the Greater Columbus Convention Center, which fit the crowd of a few thousand nicely. Both the sound system and DJ quality were great, absolutely up to the level you should expect of a huge convention. You could really feel the bass and the floor shake. The convention's formal dance also had a lot of participants, all of whom had pretty impressive formal outfits. I only wish it lasted an hour longer.

Ohayocon also featured some really cool guests, ranging from several voice actors like Greg Ayres to cool bands like the Pillowcases who cover songs by the Japanese band the Pillows. There were autograph sessions and special events all weekend.

Ohayocon had a huge schedule filled with panels and events, a few of which were filled to capacity. There were always several choices - sometimes so many that it became to decide. Events covered almost every topic you can think of, including several FUNimation industry panels and special screenings, an AMV contest, Asian Ball Jointed Dolls, Anime Podcasting, making cosplay groups, Hiroshima & Okinawa peace memorials, webcomics, and everything else. The rave also lasted pretty late into the night, for people who don't like sleep much. 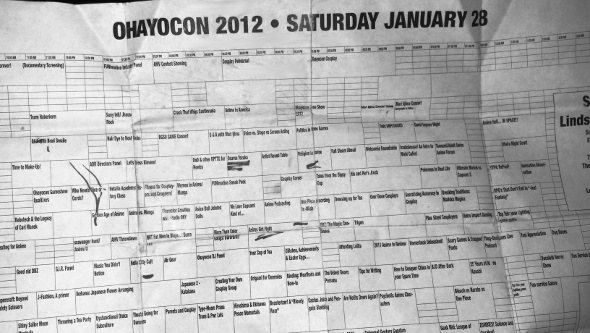 There were a ton of cosplayers at the convention, and I was floored by the number of Homestuck cosplayers. I think there were almost 300 trolls alone. Larger conventions seem to be attracting more and more other genres, in addition to anime. Be sure to check out our pictures to see some of the cooler cosplays we saw.