Posted in: UpcomingCons
Apr 29, 12 at 1:29pm | Ryan Kopf
Anime Central featured Japanese director Shinichi Watanabe ("Nabeshin") in this year's convention guest lineup. We attended the press interview with Nabeshine, and have included a transcript of the interview. Shinichi Watanabe is most well-known the director of Excel Saga, Nerima Daikon Brothers, and Puni Puni Poemy. Nabeshin was also at Anime Detour earlier this year. 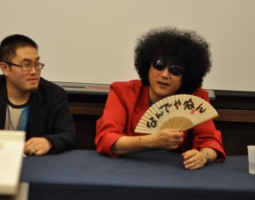 Did you have any favorite characters in Dengeki Stryker?

I'm currently working on it right now, and I do not know the whole production. I'm involved in the animated part, so I do not know the whole production. In terms of the main character, stryker zero Yamato, I like him a lot. My favorite anime involves young kid trying to become a hero, so I tried to use pictures that looked really really old, but looked kinda manly as well. In regards to the anime part I was involved in, it's going to be something that younger people will be able to look up to and want to become a hero. The whole game has some parts that are more... perverted... so I wish I had some part in that.

Last year you were wearing a kilt, asking people to touch your Daikon. I was wondering if you've gotten the chance to wear that kilt again?

The kilt in Japan looks like a skirt, and if you wear something like that and walk around all the time, you look like a weird person. I've come to conclude that's something you would enjoy in America, not in Japan. It was such a great to have such a really well made kilt, but it's something I just enjoy personally. But it's significantly cooler in the summer. It's been like my fifth year, and I've been really busy and kinda forgot it, but I may bring it next year and walk around with it.

Rumor has it that you were inspired to do Neremin Daikon brothers from a visit to Chicago. Has this visit inspired you to do something new?

When it comes to inspiration in making the Daikon brothers, the answer I usually give is the blues brothers. Just because the blues brothers was based in Chicago, he wanted to make the animation like Chicgo, and Chicago is a very nostalgic place for him to be. Chicago is a great place and the people here are great, but I really don't get to get out of the hotel. I have seen bits and parts of Chicago that I've always looked up too and wanted to see, and looking at small parts is really good. So no matter what Chicago does, it become s areally good picture.

Did you get a lot of comments on Nebeshin's hair?

Since he's had so many questions regarding the afro, I'm not even sure what all I've said in the past. I've said things like there's gods in his afro, there's women in his afro, so at this point I don't know. Being a director in a red suit, I don't think it's really necessary. Since I did pick the afro and the red suit, it's been a really good way to communicate with other people. Thanks to the afro and the red suit, he's been invited to acen and gets to talk to allot of oeppoeple. Because of that, the things that are like gods in the afro might actually be true. If I am invited back next year, and am asked the same question, I will probably ask something completely different.

I started working myself when it was a really small company that just started up. I found out that the president of the company was a big fan of Nebeshins projects like Excel Saga. When we were first scheduled to meet at his company, the silverlink president's wife was a big fan. When he actually did visit them, they were told that Nabeshin's a normal person, so I was a little sad. It's only been a few years, but I've become a big man and hte people that work there will find that Nabeshin's a great guy. I'm not sure I'm going to be surprsing them because I'm making a cool anime, or because he has a really big afro. When it comes to planning with silverlink, they are really really helpful, so it would be great to introduce a new project with them.

How do you take care of your afro?

I've been answering afro questions very sporadically with different answers. This time I'm going to pick it is energies from the gods, and in regards to shampooing it, the gods come in once a week to clean it. It's kinda sad she mentioned the word dirty in a kinda whispering voice. He does use an earth product called shampoo to refresh it every nce in a while so it's clena.

Do you think streaming airing of the current shows in Japan, withing hours or weeks after showing, is that helping the industry?

I think it was at ACEN, but I was actually involved in a panel that talked abut pirating videos and DVDs. I've beenthinking about it n a very delicate way about the pirating.

What do you think specifically of legal streaming, like Funimation or Crunchyroll?

When I was talking about pirating software, airing it immediately when it aired in Japan helped, and maybe that will help with the piracy. But whether that legal streaming services has any effect on pirating, I've not seen any data on that. When it comes to having video availble when it's released in Japan, I think it's a really good idea to do for the industry. I was surprised we went from the afro to something very serious.

Where do you see the anime industry going in Japan?

Instead of just going through one pipeline, there are going to be a number of ways to enjoy anime. Having really good bridges witsh other countries like America and China, []. The legality and borders on violence and hentai and stuff, there's different guidelines on that, and so a lot of original content would be edited, and I'm a little sad about that. It would be easier to have a world guideline regarding this animation. Once the guideline is made, I would like to go beyond that guideline. I always like to be stepping out of that line, so my theme is to go too far.

A lot of the anime you've created are very high energy, is there anything you do to get yourself in the mood to create such animes?

I can't really say that I get the energy from the afro, so I have to think of something else. Having time to go to conventions and meet people who love Nabeshin's projects and cheer him on, is definitely a source of energy for me. The energy source for my happiness, and I want to make people happy which makes me happy. And I may say something pervy, so I'm going to stop right here.

What projects are you working on, or finished, that you can talk about?

At this point, I don't have anything I can talk about, but I feel really bad that as a director there hasn't been anything I've made in the past few years. When I came to America I wanted to do something different than animation, like make a real life action movie, that's one of the reasons I came to ACEN. The reason I make anime is to make people happy. Animation is a great way to make people happy, but I'm always thinking about great ways I can make people happy. There's a possibility that it might sprout to make something else other than an anime, but there's always the possibility of it becoming an anime. If I do end up making something, I will definitely end up telling the american crowd about it.

Would Nabeshin consider a live action version of Excel Saga?

It would be a very difficult task. When I was making it, there were a lot of things I put in that I shouldn't have, that if you put into real life action you shouldn't or couldn't do. But it is a great idea and I'll definitely be thinking about it when I go back to Japan. Nabeshin is certainly there, but I would have to find other actors as well. Excel Saga Live Action, coming soon!
Please login to post.