UpcomingCons
May 03, 12 at 10:58pm | Ryan Kopf
Attending the Sixh.OPERA at Anime Central was like attending a fashion show, J Rock concert, and Opera all at once. In fact, it wasn't "like" that at all - it was exactly that. 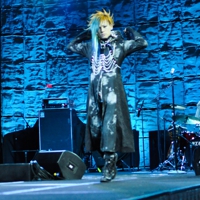 Sixh has a guitarist, drummer, keyboardist, and lead vocalist, Designer IBI (Sixh.IBI). The group's naming conventions oddly remind me of Ruby, a programming language that also comes from Japan (the Name-dot-Something).

The show went on just like a fashion show with Opera in the mix. Though Opera doesn't usually include guitars and keyboard, the vocals were similar (and I didn't understand the lyrics, which were in Japanese, another criteria for Opera, ;D).

The Sixh. image is "a goth-esque, monotone cool feel." I don't know a thing about fashion, but it all looked pretty cool.

Enough talk, here are the pictures.
Please login to post.