Igaguri Chiba to Appear and Perform at FanimeCon 2012

Posted in: UpcomingCons
May 04, 12 at 2:34am | Press Release
San Jose, CA (May 3, 2012) – FanimeCon is pleased to announce that Igaguri Chiba will be performing at FanimeCon 2012’s MusicFest, held on May 26, Saturday evening of Memorial Day weekend. 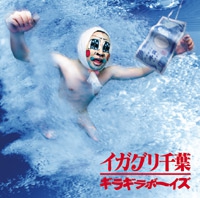 Igaguri Chiba is the vocalist of the musical group Sendai Kamotsu. The story goes that six workers from a mysterious freight company from the Miyagi Prefecture, perform together for a hobby. However, they always wear red overalls and heavy makeup to hide their identity from other coworkers at the freight company. Chiba works in the delivery department of this company and is the younger brother of Nightmare’s vocalist, Yomi.

Sendai Kamotsu announced their hiatus in November of 2009 due to the freight company becoming bankrupt in the economic recession. The bankruptcy story is told in their “Fukyou no Kaze” music video. Since then, Chiba has launched a solo career in efforts to build up the capital to revitalize the freight company.

In October of 2010, Chiba released his first solo single, “Gira Gira Boys”. Japanese for “Glitter Boys”, it exemplifies Chiba’s flamboyant performing style. He then embarked on a short tour titled “”Gorgeous” 3 Point Special~On the Road Until Sendai Kamotsu's Revival~vol.1”. Chiba is currently preparing for his third tour, set to begin on June 29th, 2012.

In addition to his performance at MusicFest, Igaguri Chiba will be hosting panels, holding autograph sessions, selling limited merchandises and interacting with international fans during FanimeCon 2012. The complete schedule of events will be available at www.fanime.com closer to the convention.

About FanimeCon – FanimeCon is Northern California’s largest anime convention. Packed with videos, costumes, music, games, parties, tournaments, panels, and guests from around the world, this annual celebration of Japanese art and popular culture entertains a colorful spectrum of fans and friends. FanimeCon is “By Fans, For Fans”, and over 20,000 enthusiasts joined the fun at FanimeCon 2011. FanimeCon will return to downtown San Jose during Memorial Day weekend, May 25-28, 2012. For more information, please contact FanimeCon Marketing at marketing@fanime.com or visit www.fanime.com.
Please login to post.