Posted in: UpcomingCons
Sep 11, 12 at 9:44pm | Press Release
Norwalk, CT, September 10, 2012: New York Comic Con (NYCC) officials today announced that Sesame Street’s Elmo, the 3 and a half-year-old monster with the high pitched voice and contagious giggle, will appear at the show along with his good friend Gordon (Roscoe Orman). The hugely popular and widely recognized pair from Sesame Streetwill visit the annual pop culture event during NYCC Kids, a day focused on programming and activities for younger fans and their families on Sunday, October 14, 2012. Organizers note that further details about the appearance, including the precise time Elmo and Gordon will be present for kids and fans will be announced in the near future on the NYCC website. 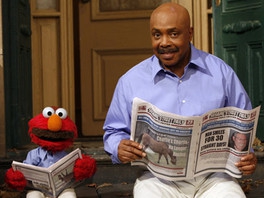 NYCC Kids, which always takes place on the last day of New York Comic Con, is enormously popular for children and their parents, annually attracting thousands of young kids to the pop culture extravaganza. Each year, NYCC invites the young and the young at heart to the event to enjoy, create and share in the love of all aspects of pop culture. NYCC Kids features activities for kids including drawing workshops, author readings, animal education, active games and events, and a chance to see and meet their favorite characters! New York Comic Con, which hosted over 100,000 fans last year, is one of the largest annual conventions to take place in New York City. This year’s event will take place October 11 – 14, 2012 at the Javits Center. Tickets are selling quickly and may be purchased at www.NewYorkComicCon.com.

“I am delighted to be welcoming Elmo and Gordon to New York Comic Con,” notes Lance Fensterman, Group Vice President for ReedPOP and Show Manager for NYCC. “Not only will they be a highlight event for NYCC Kids, but they also underscore the range of personalities and talent who are attracted to our show. There is something for everyone at New York Comic Con and it doesn’t make any difference if you’re 3-years-old or 80-years-old. That’s what our show are all about! We provide the very best entertainment in the pop culture universe and we cater to every age and demographic. Elmo and Gordon are legendary and we’re pleased to provide this opportunity for thousands of kids (and adults!) to see them in person.”

ABOUT ELMO: Elmo is a 3 ½-year-old red monster who is enthusiastic, friendly and cheerful. He always wants to be part of everything that goes on. However, like most preschoolers, he sometimes doesn’t have the skills or knowledge to do what he wants. But that never stops him because he has a very positive, optimistic view of himself and life.

ABOUT ROSCOE ORMAN / “GORDON”: Roscoe Orman (Gordon) is an accomplished actor whose credits extend to television, stage, and screen. This season of Sesame Street marks Orman’s 37th year as Gordon, a science teacher who is married to Susan and the father of Miles.

Orman has worked extensively on the New York stage with the Negro Ensemble Company, New York Shakespeare Festival, Manhattan Theatre Club, New Federal Theatre and American Place Theatre. Orman’s film credits include the title role in Willie Dynamite, F/X, Striking Distance, New Jersey Drive, Drive By, Thirty Days,Twilight’s Last Gleaming, Coney Island, Compliments of the Serpent and the 2011 family film Jeremy Fink and the Meaning of Life. On television, he has been seen on such shows as Sanford and Son, Kojak, All My Children,Law & Order, Sex and the City, Cosby and The Wire. He has authored two books, Sesame Street Dad: Evolution of an Actor and Ricky & Mobo, a children’s book which he also illustrated.

As noted, tickets for New York Comic Con in 2012 are currently available for purchase atwww.NewYorkComicCon.com. Anyone interested in exhibiting at New York Comic Con should contact Larry Settembrini, Larry@ReedPOP.com. Other information about the show, as well as news about ReedPOP, which organizes a range of pop culture events, is available at facebook.com/NewYorkComicCon andtwitter.com/NY_Comic_Con . Organizers note that many more guests will be announced over the next few weeks and fans should keep their eyes on NYCC’s website and blog for additional comics, entertainment and anime announcements.

ABOUT REEDPOP: ReedPOP is a boutique group within Reed Exhibitions which is exclusively devoted to organizing events, launching and acquiring new shows, and partnering with premium brands in the pop culture arena. ReedPOP is dedicated to producing celebrations of popular culture throughout the world that transcend ordinary events by providing unique access and dynamic personal experiences for consumers and fans. The ReedPOP portfolio includes: New York Comic Con (NYCC), Chicago Comic & Entertainment Expo (C2E2), Penny Arcade Expo (PAX) Prime & East, Star Wars Celebration, Fantasy Football Fest and the UFC Fan Expo. The staff at ReedPOP is a fan-based group of professionals producing shows for other fans, thus making them uniquely qualified to service those with whom they share a common passion. ReedPOP is focused on bringing its expertise and knowledge to world communities in North America, South America, Asia and Europe.
Please login to post.