UpcomingCons
Oct 27, 12 at 2:22am | Ryan Kopf
Last year's Youmacon drew together over 10,000 otaku to celebrate one of the largest anime conventions in the country to meet guests like LittleKuriboh and Vic Mignogna. 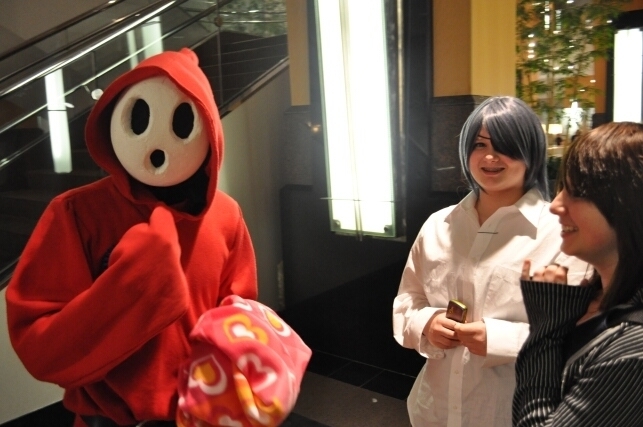 Shyguy from Youmacon 2009
This year's Youmacon is held again at the Detroit Marriott at the Renaissance Center in downtown Detroit Michigan, and the event list is as big as ever, including a Charity Cosplay Ball, numerous autograph sessions, and a rousing game of Anime Name That Tune.

Charity Ball
Held on Friday evening, the charity ball (a formal dance) is the highlight of many conventions for some fans. The dress code forces attending fans and cosplayers into formal attire, eschewing jeans and T-shirts for tuxedos, dark suits, and ball gowns.

Karaoke
Karaoke, always popular in Japan and among anime fans, will be limited to anime, video game, jpop, jrock, and other 'nerd'-themed songs. And for fans of MLP, there will be a My Little Pony: Karaoke is Magic hosted on Thursday.

Rave Dance
Every night features a rave dance held in the RenCen Marriott.

Maid Cafe
Youmacon's maid cafe is a treat for fans wanting to be served by maids, and they were gathering suggestions on what the maids should call you on the forums (yes, Goshujin-sama!) For fans who buy a special ticket or platinum badge, there is a chance to meet the convention's guests at the maid cafe as well.

View our pictures from Youmacon 2009