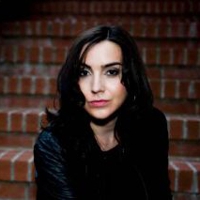 Lisa Ortiz’s career as a voice over artist began under the shroud of an attempted auto larceny gone awry. Luckily for her, and for her sibling the perpetrator in question, the car battery died. (According to Lisa “No seriously, my brother tried to steal my car. That’s how I got into anime. Just ask me. I’ll tell you.”)

What followed was a string of serendipitous events that to led her to a career in voice acting that has spanned over a decade, includes dozens of animated series, films, video games, audiobooks, commercials and other voice work. A veteran voice actress holding a BFA in theatre from Hofstra University, she is perhaps best known in the anime world for her works as Lina Inverse in Slayers (a role she reprises in Slayers Evolution), Amy in Sonic the Hedgehog and Serenity Wheeler in Yu-Gi-Oh. She has appeared in a number of animation including Pokemon, Revolutionary Girl Utena (Shiori), Magic Users Club (Nanaka), Animation Runner Kuromi (Kuromi), One Piece, and Winx Club and a number of others including the role of Yuko in the film Exte. After an extensive time spent in front of the microphone, she has in the past few years stepped behind it to Direct, Produce and Adapt animation as well. She can currently be heard in Pokemon Black and White (Oshawott), on 4kidstv as Patina in Magical Do Re Mi, Bellino in Lil’ Chicks, as well as on the upcoming iphone app for the children’s audiobook, the Poky little Puppy.. A personal triumph is her work in the Game Grand Theft auto, which she believes stands as a symbolic homage to her illicit beginnings as a voice over actress. She currently resides in NYC, and does not own a car.