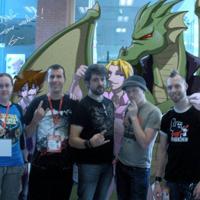 Otaku band LeetStreet Boys stormed into the anime convention scene in 2008 with their debut single and music video “Yuri The Only One.” The band went onto produce 3 albums spawning songs like “Cosplay Girlfriend”, “Guitar Hero Hero”, “She’s So Kawaii”, and “Imaginary Boys.” Additionally the group performed the theme song for the popular dating sim Roommates. Their music has reached millions of views on social media, their music videos have been screened at anime festivals worldwide and on Japanese TV, and the group has performed at numerous anime conventions across North America. Most recently LeetStreet Boys began re-imagining and releasing new acoustic versions of their past favorites. LeetStreet Boys is excited to share their excitement for anime, video games, cosplay, fandom and the otaku lifestyle with fans around the world!