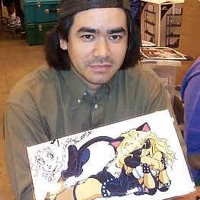 Doug Smith is an artist and voice actor who had once worked for Studio Ironcat before it’s dissolution.

He’s done cover design for manga such as Vampire Dahlia and Vampire Yui, and has voiced characters such as Kintaro Oe of Golden Boy OVA and Takeru Yamato in Dragon Knight OVA. You might know him from shows like Case Closed, Original Dirty Pair, and Slayers among others.