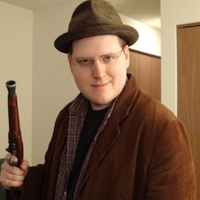 Lewis “Linkara” Lovhaug has had the misfortune of being cursed to review comic books on the internet. Somehow this has made him popular on the website That Guy With the Glasses, though many suspect it’s more so people can stare and laugh at the weirdo. On his show, Atop the Fourth Wall, he regularly contends with the surreal, the stupid, and the senseless books that the comic industry has produced over the last eighty years. If that wasn’t sad enough, he also has done a retrospective on Power Rangers (released on the schedule of when a blue moon rises on the 13th hour of the 13th day of the 13th month), actually attempting to grant serious analysis to a series about guys in spandex punching rubber-suited monsters. It’s best not to make direct eye contact with him.