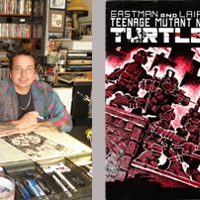 In 1982, while trying to sell some of his illustrations to local fanzines, he met Peter Laird in Northampton, Massachusetts and the partnership studio; Mirage Studios was formed. Less than a year later in the middle of a late night jam session, Eastman doodled a new character he dubbed a “Ninja Turtle” to make Laird laugh—several sketches a final drawing of four characters later “Eastman and Laird’s Teenage Mutant Ninja Turtles” had officially entered the universe!