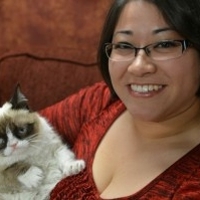 Samantha Inoue-Harte is a voice actress and also founder of Saiko Studios animation studio. She played Chocobo in Final Fantasy: Unlimited, the anime series, and as Kohran Li in Sakura Wars. She’s been Pipin in Magical Witchland, Tsukuyomi in Negima!, Dieter in Pumpkin Scissors, Carly in Trinity Blood, Cat in Steam Detectives, among many other roles.