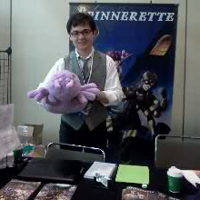 Veteran artist Krazy Krow has been making webcomics for over 20 years.  He is the creator and writer behind Spinnerette, a comedy about a spider-powered superheroine, and White Heron, a military superhero story set in Korea in the 1980’s. His first comic, Krakow, was originally published in the University of Calgary student newspaper before leaping onto the web. Through Kickstarter, Krazy Krow has raised over $275,000 for his comics. Check him out online at www.spinnyverse.com!