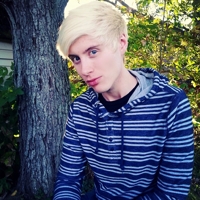 Daman Mills is a brand-spankin’ new Voice Actor talent in this crazy fun industry of Bright-Eyed Kawaii Chibis, Super Saiyan screamin’, Titan-crushin’ goodness we lovingly call “Anime”! This past year, he has weaved his way into the New York “VO” recording community where they’ve taken him into a friendly warm embrace (he’s a newbie, they’re being gentle). Dabbling here and there and everywhere, he’s been voicing on everything from Animation, Video Games, Commercials, Telephone Prompts, and whatever else he can get his hands (or voice…?) on! He also records from home! Neat, right?!
Recently, Daman made his debut on the hit series “Pokémon” airing on Cartoon Network in Season 18 and in “Pokémon The Movie: Hoopa & The Clash of Ages”. In the premiere of Season 19 “XY&Z”, Daman voiced one of the villainous Team Flare henchmen that are hunting down Zygarde! See him battle it out with Ash Ketchum and friends! Daman was also the lead protagonist Shinta Mizumura in the 2 episode anime OVA “Holy Knight” by Media Blasters. Other rad stuff Daman’s lent his voice to are titles like the Anime “Ladies versus Butlers” as Selnia’s Father, the video game “YIIK: A Postmodern RPG” as The Krow, “Cryamore” as Riot, “Super Ubie Island” as Dr. Terrestrial, “Seduce Me 2: The Demon Wars” as the Dragon, and a ton more! Check him out at www.damanmillsvo.com!