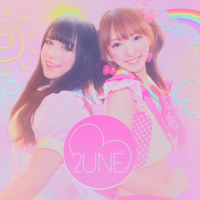 Japanese-American J-Pop group, 2UNE, is back to put on a revolutionary performance like you’ve never seen before! 2UNE (pronounced “Tune”) is a New York City-based J-pop Idol group consisting of 2 members— Uno from Japan and Sneko from the US. To commemorate their 3-year anniversary, 2UNE will be performing their brand-new single, “COLORIZE The World” for the first time at Liberty City, alongside Ari.Ki, twin dance group and 2UNE’s very own choreographers, to bring you their biggest show yet! 2UNE will also be unveiling a few of their English version songs for the first time, so don’t miss out! If you’re a fan of J-pop, idols, or just sick dance music, make sure to 2UNE in to their concert!