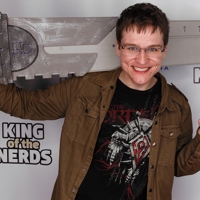 Sci-fi / Fantasy author and game designer Zack Storch competed on the major reality TV show “King of the Nerds.” On the internationally broadcast show, his passionate statements about nerd culture made him a fan favorite to many, while others like podcaster Rob Cesternino have called him “the best reality TV villain since Russel Hantz.” He has created two card games: “Planar Catastrophe,” featuring art from the adaptation he wrote of his novel, “Za’nar: Impossibility,” for the globally-popular MMORPG “Adventure Quest Worlds,” and “The Town of Roshamberg,” a tactical, rock-paper-scissors inspired, fantasy card game with 24 quirky characters. A presence in the World of Warcraft fandom, Zack is in the World of Warcraft 10 year anniversary documentary, “Looking for Group.” In addition to writing and card games, he is currently developing an RPG platformer video game with unique two-character controls. You can find Zack on his Verified Facebook Page, “Zack Storch,” on Twitter @Zadck3, and learn about his writing and game design projects at VoidSaga.com.