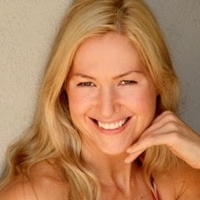 Lisle Wilkerson grew up in Tokyo, Japan. She speaks fluent Japanese, and does voice work in both English & Japanese.
She is the powerhouse behind some of the gaming industry’s most popular female fighting characters, such as Nina Williams and Christie Monteiro, Sarah Bryant from Virtual Fighter, as well as Joy and Xiuying in Shenmue II. She not only does video game voices, she has also done the voice of Badtz Maru (from Hello Kitty) and commercials for many internationally renown companies as Nissan, Panasonic, Sony, United etc. Lisle did dubbing for two live action ULTRAMAN films, which were just recently in theaters here in the US. And she will be doing more work this year with the Ultraman franchise. Lisle acted alongside Bill Murray in the Academy Award winning Sofia Coppola film “Lost In Translation”, and had a lead role in the award winning indie film "Kamataki”. She currently lives in Los Angeles, where she continues to do voice work, and also works as an interpreter. Lisle has interpreted for everyone from Keanu Reeves to best-selling author Marie Kondo to anime director Makoto Shinkai and Love Live Sunshine. She is also a local media correspondent for Japan, covering high-profile events like The Grammys, Academy Awards, Emmys and Golden Globes. And she does a monthly entertainment news show for Japanese television Lisle is also the assistant producer of the upcoming film, "Black Hat”. Most of Lisle’s panels are focused on Japanese culture, as well as about the VA world and working in Japan. (and yes, OF COURSE that includes many Engrish stories!!) Lisle is also excited about the 2020 Olympics being hosted in her home city, Tokyo, and has recently started doing quite a bit of work related to that. And when Lisle isn’t busy working or running around the country doing cons, you might find her in her pink boxing gloves trying to save the world Nina Williams-style.