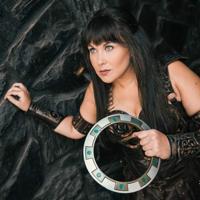 Jessica Crouse is an actress, model, cosplayer, playwright, and LGBTQ activist. She has her BA in Theatre from the University of Maryland. She spends her days balancing work with being the mom of her 6 year old son.
Jessica cosplays Xena Warrior Princess, Maleficent, Bellatrix Lestrange, Poison Ivy, Black Widow, Pin-up Snow White, Newt Scamander, Lara Croft, and a few other creations of her own. She loves cosplaying interesting and kick-tail women. Xena is her absolute favorite cosplay. Xena was her hero growing up, so that fact that she gets to cosplay her and bring that joy to others is beyond words.

Jessica started cosplaying about 5 years ago. She always loved costumes, but fell in the love with the cosplay comminuty after her first time cosplaying. Shortly after that she began collaborating with a lot of makeup artists and industry professionals in FX makeup. She was fascinated and tried to learn eveything she could from them. She began by letting them put the makeup and prosthetics on her and then slowly through following their instruction and countless hours of practice, she began doing all her own makeup and prosthetics. This past year Jessica taught a cosplay workshop and a Stage Makeup class at Anne Arundel Community college. She has been asked back for the spring semester and looks forward to continuing to spread the love of cosplay and creation.

Jessica has always loved charismatic male characters such as Captain Jack Sparrow and Han Solo. She had always wanted to cosplay as them, but didn’t think that she could. But within the last year she has started branching out with adding male cosplays to her rotation. She has started with Newt Scamander. After that went extremely well, she now has plans to add other favorite male characters. She uses her knowledge of makeup and fx makeup to transform her face into the faces of the characters that she is cosplaying.