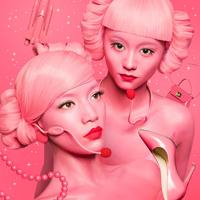 A dance and rap duo formed by RiRi and Lula; mannequins have emotions. “Fxxk Boyz Get Money,” released in 2014, became a big hit among teens in the US and Europe with its extreme rap and sexy TWERK dance. As a girlʼs anthem, it received high acclaim by fashionistas and influencers around the world. Its music video was viewed nearly 2 million times on YouTube! In the US, “Vice” called FEMM a “supergroup,” and FEMM got Artist Of The Week at MTV IGGY with 97.97% votes. Their digital album “Femm-Isation” was released on an indie label and it hit # 10 on the Billboard world hit chart. In Japan, they appear on the Google Android TV commercial “New Android version,” and in 2016, they made a major debut with an EP+1st Album ”PoW!/ L.C.S. +Femm-Isation.” 4 consecutive music videos released following their debut were on MTV JAPANʼs heavily played videos. They also made a debut in UK and selected as the most worth noting artist for 2016 by Huffington Host Entertainment UKand was mentioned on international recognized art website, Creators Project. FEMM also performed at “HYPER JAPAN Christmas,” the leading Japanese culture event in the UK. A gagaku trap, “animus” by “FAMMʼIN,” the female rap crew teamed up with FAKY and Yupʼin, has been premiered at Londonʼs DAZED. FEMM keeps making leaps in Japan and overseas.