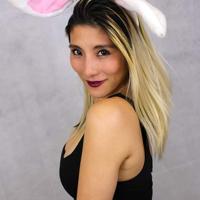 Presenting Japanese native and New York City based Electro-Pop singer, “renireni” Reni Mimura! Reni is well known for her futuristic adorability, profound concepts and a high-energy onstage presence. Born and raised in Japan, Reni got her big break after she won a talent search competition in 2006. That same year, she released her first CD in Japan, which was produced by Takahiro Yamautsuri, who composed several songs for the anime movie – Pokémon movie song of : Make a wish. Reni relocated to New York City in 2008 bringing her unique style of Moe entertainment to the United States. She was quickly recognized as a leader of the Moe Revolution, and soon gained a following of devoted fans called “Angels”! As her fan base increased, so did attention from the U.S. and Japanese entertainment industries. In 2010 the National Broadcasting Television Station of Japan (NHK) made two documentaries on Reni’s career in America and the impact of her performances on western audiences and the fashion industry. Reni has released two CDs in America: Sakura in 2009 and Hybrid Girl in 2012. Hybrid Girl, blends eastern Moe concepts with fun western electro-pop dance beats and features popular tracks like “Secret”and “Rock Paper Scissors”. In 2010 she published her first photo book called Maid in NY. Gamers know Reni best from her work on the Just Dance video game series, where she sings popular songs such as: “Chiwawa”, “Oishii Oishii”, and “Sayonara”. “Chiwawa” has proven to be a breakout hit, and was featured on an episode of Showtime’s Ray Donovan!

In 2013 Reni founded the first official Maid Café in New York City, which garnered a great deal of press and recognition. In 2015 Reni and the Café were both featured on ABC’s Nightline. Reni is constantly touring prominent Anime conventions and other music events across the nation.

Beginning with a popular iPhone 5c commercial in 2013, Reni has been featured in several American TV commercials and independent films. She’s even appeared as a stand-up comedian at Carolines on Broadway! Currently, Reni is working towards expanding her acting career. She hopes her Angel (That’s YOU!) will be inspired when they see her take on new roles. In 2019 Reni started her own YouTube Channel! Her videos combine a fun Japanese Anime style with American life. Don’t take your eyes off of Reni!