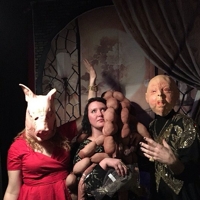 Theresa Buchheister is a voice actor and director, having worked on countless projects over the years. Most recently, Theresa was Aliana, one of the baddies of Team Flare in Pokemon. She directed the 18th Pokemon film – Hoopa and the Clash of Ages, as well as the 18th season and half of the 19th season. She directed Season 7 of The Winx Club and directed Seasons 1 and 2 of World of Winx, as well as voicing a bunch of guest characters. She has directed multiple episodes of Robocar Poli, Bears!, Rolando Locomotiv, Pooches, Moonzy, and more that she cannot talk about yet!
She has also worked in audiobooks, radio, video games, commercial, and, especially, weird theatre. She directs with Audioworks for voiceover, teaches at SAG and runs Title:Point (theatre company), Vital Joint (venue), The Exponential Festival.