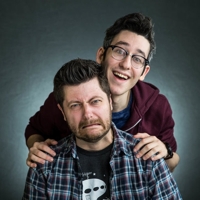 Sam & Bill are a comedy music act native to NYC, who formed in 2009. They perform at comic cons and festivals all over the country, and have shared the stage with acts like Tracy Morgan, Dave Attell, Schaffer The Darklord, and Judah Friedlander. Their debut album Sam & Bill Are Huge was a #1 seller in Amazon’s comedy sales, and they have been called “seriously contagious” by Splitsider, and “not assholes” by Schaffer The Darklord.