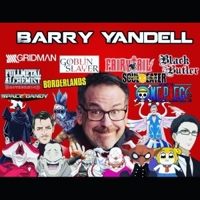 Nominated for Best Supporting Actor by BTVA for his iconic role as William T. Spears in Black Butler, Barry Yandell is a well-known and very busy regional stage actor and voiceover artist based in North Texas. Most recently, Barry lends his voice talent to the characters of Conehead in Fire Force, Zelada in Cop Craft and Kodai in Yu-No. Fans will recognize his voice contributions in some of the most popular Anime series to date including Alexis Kerib in SSSS Gridman, Yoki in Full Metal Alchemist, Mr. 2 Bon Clay in One Piece, Little Demon in Soul Eater, Dwarf Shaman in Goblin Slayer, and Popuko in Pop Team Epic. Additional roles include an array of characters from Dragonball Z, Ghost in the Shell, Fairy Tail, and Attack on Titan to name a few. Please visit Barry’s actor pages at IMDB.com and behindthevoiceactors.com for a full listing of characters and upcoming new roles.